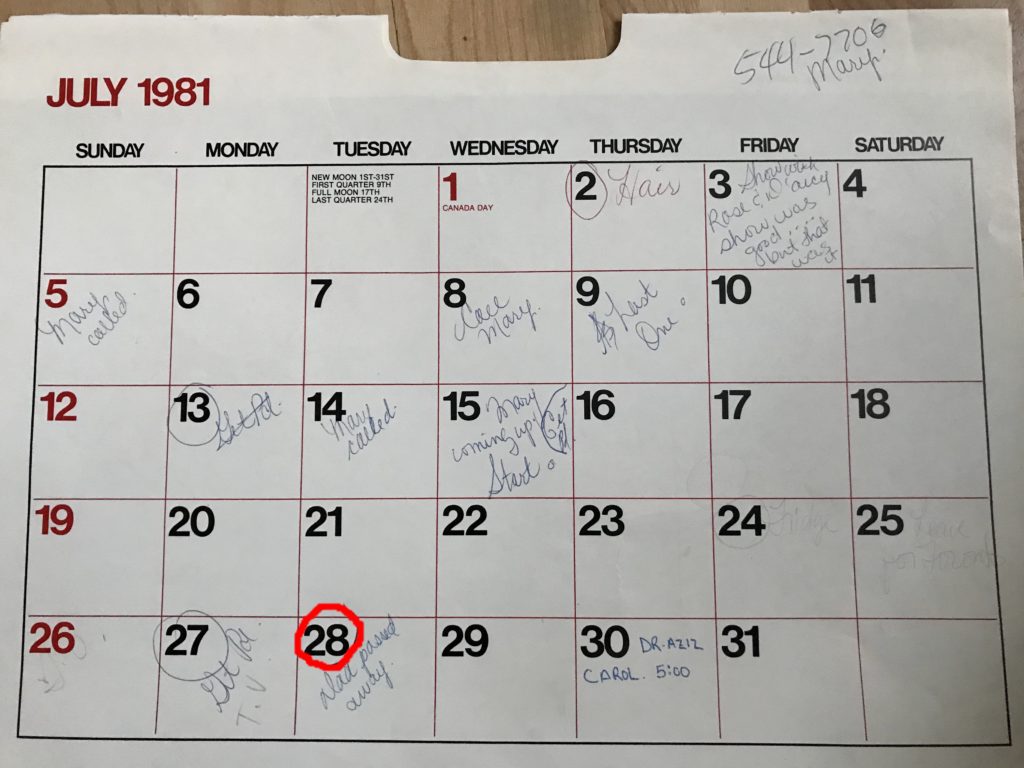 We had spent the next month taking turns visiting Dad at St. Mike´s.  My brother, my boyfriend at the time and I spent the weekend of the 24th  in Toronto visiting him.  He was in great spirits and we left to come back home to Parry Sound happy that he was doing so well.  But in the back of my mind, I´ll never forget what I saw when we first arrived.  I remember for some reason, peeking in his room before we went in…  he didn´t see me but I saw him.  He was wearing his dress shirt, buttoned right up, laying in his hospital bed that was propped up – waiting for us.  He was looking out the window.  He looked so serious, I remember wondering what he was thinking about.  Then we went in and the frown was replaced with a quick smile and the moment was gone – but not forgotten.  I´ve thought about that stolen moment for a long time.  I think he was wondering what his life was going to be like not being able to cut the grass… do cartwheels off the dock into Whitestone Lake… to play the fiddle but not be able to tap his toe.  He was a very active man, and he loved playing music.  When he played the fiddle or the guitar, his foot was always in tune with the instrument… tapping away.  I´ll never know for sure, but I feel that this could have been part of his far away look… he was a million miles away.

The following Tuesday, as my Mom and sister got back to Dunchurch after seeing him, they received a call that there was a complication and they better head back.  They didn´t think he was going to make it.  They turned around and headed back to the hospital.  By the time they got back, he had passed away.  Apparently from a blood clot.  We were all in shock.  Absolute disbelief.  From that day on, I don´t remember much until around 1984.  No journal, no nothing.  Just a dark space.